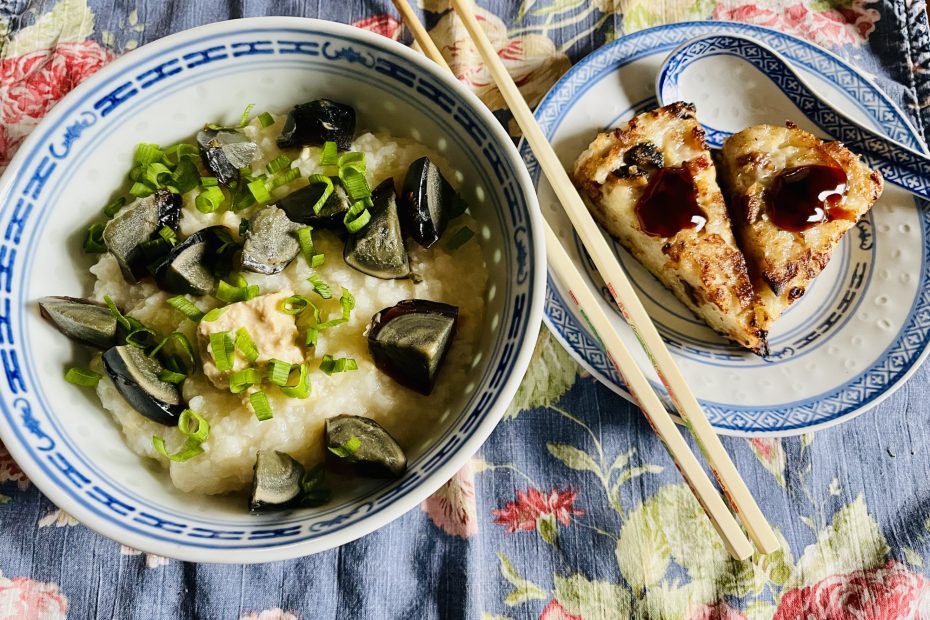 When I was a teenager, old enough to venture into San Francisco on my own from my hometown, about 35 minutes north of the city, I often visited Chinatown. My friends always wanted me to take them there to go shopping in the trinket stores, for electronics (really for to try and haggle over the price of a Walkman!), and often for the food. Whenever I went, my mother would usually ask me to bring back two things, Luóbo Gāo (radish cake) and Dan Tat (egg custard tarts). Both were things we never tried to make at home.

Fast forward a few decades, and I don’t have a local Chinatown to visit, and I’ve learned to cook much better. Luóbo Gāo is one of the things I’ve been trying to make for years. I’ve tried many different recipes. One was from a dim sum cookbook that wanted me to soak rice overnight, then liquefy it in a blender. I tried that years ago (pre-Internet), but I didn’t have a blender, but I did have a food processor…but it just left me with a gritty mess that never got close to edible. Later, I know I had hit-and-miss success, but I wasn’t really paying close attention. More recently (like the last 10 years), I’ve been trying to pay attention, but in hindsight, I didn’t pay close enough attention to the advice I give others.

My failures usually were too gooey and gelatinous. The cake wasn’t firm, and while it tasted pretty good, the texture was all wrong. It seemed to me that the ratio of rice flour to water must be the issue. So, I’ve scoured the Internet examining different recipes from blogs and videos. The reality is, many recipes from many trustworthy places varied greatly on this issue. Some recipes had a relatively low hydration level while others were very high hydration. I tried them all. And, they all ended up with the same gooey cake. Taste was good, but the texture was not.

When I teach people to make bread and bagels, I always spend time talking about flour, and the differences in types and brands. Different flours can make or break your breads. But, I hadn’t listened to that advice for my Luóbo Gāo. Why? I think it hadn’t occurred to me because I’m usually mostly focused on protein levels for wheat flour in bread. That affects gluten development and depending on what you’re baking, you want lots of it (bagels), or maybe not (ie birthday cake). Fortunately, just recently for some reason, I finally had the realization that I might want to try different rice flour. I had been using both the white and brown rice flours that I get from my local natural food grocer. It’s just 5 minutes from home, I go most weekends, and it’s easy. The nearest Asian market for me is about 40-45 minutes away, and while I do go about once a month for other foodstuffs, I never bothered to get rice flour because I had a ready supply close to home.

So, I picked up a bag of rice flour. It’s the bag that, to my eyes, is ubiquitous as I think I’ve seen it for as long as I can remember, and in practically every Asian market I’ve ever shopped at, Erawan Rice Flour. Using this flour, I tried following the basic process I’ve done in any number of different recipes: grate the radish and cook it with a little water, soak some dried shiitake mushrooms and dried shrimp. Chop up some Chinese sausage and scallion, then do the same to the mushrooms and shrimp when they are hydrated. Saute these in a wok for a bit, then add them to a bowl with the cooked radish. To this, I’d add a slurry made from the rice flour, water, and some spices. The differences in most recipes are the amount of flour and water, but otherwise not a lot of variation here.

Given my past experiences that included adding rice flour, but no additional water to enough water to make a thin batter…but always ending up with a gooey, squishy, not really appetizing finished product, I opted for the low hydration method to start. I drained the radish in a colander, and even pressed it some with a wooden spoon to get rid of more liquid. For my flour mix, I used 120g of flour…why? Mostly because 120g of all-purpose flour is a cup, so it was an easy number to remember. To that, I added some spices (ie salt, white pepper, sugar), and a small amount (¼ cup) of the mushroom/shrimp soaking liquid and mixed it into a slurry/batter. Added that to the radish and other ingredients, splashed a little sesame oil into it, and mixed it up. Then, like all the recipes I’d tried over the years, I steamed it in a well-oiled pan for 50 minutes. Since I was conscious of the idea that too much water might be the reason I get gooey Luóbo Gāo, I covered the pan with plastic wrap, then foil to seal out the moisture from the steam before I placed it into my steamer.

After 50 minutes of steaming, and another 45 minutes to let it cool, I ran a paring knife around the edges to loosen it, and inverted it onto a cutting board. A little shake, and the cake came out of the pan cleanly…and I could tell by just looking at it that it was different. Well-defined edges from the shape of the pan…and slicing it with a knife, and it was a nice firm cake. My knife wasn’t covered in a gooey mess! Success? I’ve since tried repeating this and made sure I measured and took notes, and I feel good saying that I’ve got a reproducible recipe…with just one disclaimer — this has only been tested to work with Erawan Rice Flour! At this stage, I’m not sure I even want to try this with the rice flour from my local natural food market. I’m quite certain I did virtually an identical process before with no luck. They say never change a winning strategy…so I’m sticking to this!

If there is anything to be learned here, it’s that I need to listen to my own advice and pay attention to the flour, whether it’s wheat flour for breads and pastry or rice flour for Luóbo Gāo! Please give this recipe a try, and let me know if it works for you too!